--Notes and English version of the text, ©2009, by Edward Lein;
all rights reserved. Please notify & credit when reprinting

Maurice Ravel (1875–1937) composed his magically evocative song cycle, Shéhérazade, in 1903 (the same year as his String Quartet and the first movement of his Sonatine for piano solo), setting for high voice and piano three poems by his friend, Tristan Klingsor (pseudonym of Léon Leclère, 1874-1966). The orchestral version soon followed, and it seems likely that the orchestrations were as much a part of Ravel's original conception as the vocal part and harmonies. The cycle was written for either soprano or tenor, and although it is seldom performed by a man, in 2004 baritone Konrad Jarnot released a recording with pianist Helmut Deutsch.

In 1903, Klingsor published a collection of 100 poems inspired by reading the Middle Eastern folktales known collectively as One Thousand and One Nights (or, Arabian Nights) which lately had been published in a French translation. He titled his poetry collection Schéhérazade, chosen in homage to Rimsky-Korsakov's similarly inspired symphonic suite, of which both he and Ravel were fans--it is perhaps significant that at the mention of "Sinbad" toward the end of the first song the solo violin, featured so prominently in Rimsky Korsakov's suite, can be heard in Ravel's orchestral setting (albeit doubled an octave below by Ravel). Ravel and Klingsor were likewise big fans of Debussy's revolutionary opera Pelléas et Mélisande, and they reportedly attended all 14 performances of the opera's premiere run in 1902.[1] When Ravel decided to set three of Klingsor's poems he made the poet re-read the lines aloud repeatedly, hoping to capture the rhythms of French speech patterns as perfectly as had Debussy.

Often warm and glittering but suffused with a melancholy longing, Ravel's music transforms our understanding of the poetry, particularly in the first and final songs. When first performed in 1904, Asie was sung as the last rather than first song. But when it came time to publish the score the composer changed the order of the songs, instead concluding with L'indifférent, in which Ravel "once suggested that the key to his own personality lay hidden ..." [2]

Note on the translation:
Ravel was exacting in his rhythmic setting of the French text, and the intent in my English version was to match the rhythm of the French original, syllable for syllable as closely as I could (but not with the intent that the English version might be substituted in performance!). Consequently a few words, mostly adjectives, not explicit in the French have been added to "fill-in-the-blanks" of the English -- these additions appear in gray font, and I would have no problem if they were omitted in reprinting. Less frequently a French word or two may have been omitted as long as the meaning isn't altered. A few other minor liberties have been taken in hope of making the English sound a little more linguistically idiomatic or "poetic," e.g., in the third line, "Où dort la fantaisie ..." which literally translates as "Where sleeps the fantasy ..." has been rendered: "Where sleeping fantasy lies ..." 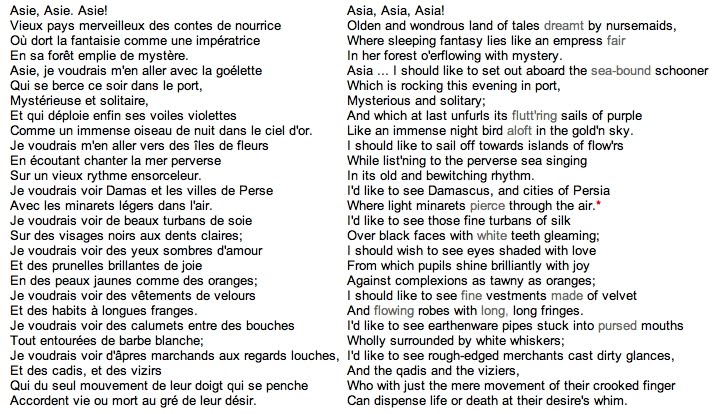 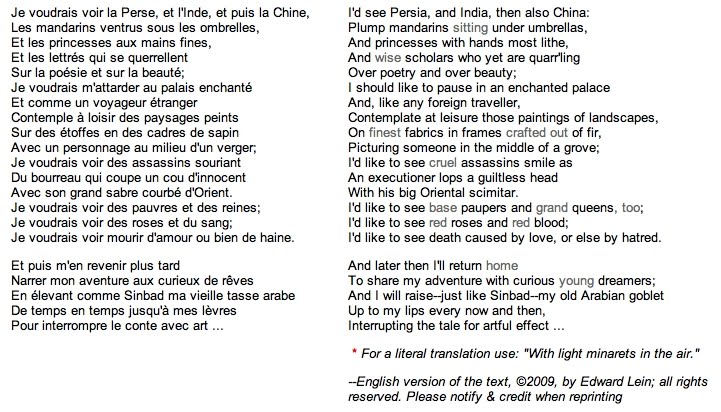