The third movement of Un Dulcito (i.e., "A Little Latin American Sweet"), my suite for string orchestra (also available as a duo for violin and cello), is a chaconne-like setting of the Mexican folk song, La llorona, combined with the Latin hymn from the mass for the dead, the Dies irae. Un Dulcito. 3. La llorona

The legend of the Weeping Woman (more of a ghost story really) varies throughout Latin America, and there are even some American versions of the tale (including one set in Kansas City). Essentially, a beautiful woman sets her sights on a wealthy man, but he rejects her because he doesn't want to be saddled with her several children. She decides she really, really wants the man, so she drowns her children--in some versions the man rejects her again, horrified by her monstrous behavior; and in others she is overcome by remorse and grief at what she has done. In all versions, she ends up drowning herself, and her spirit is doomed to wander the waterways in search of her children, tearfully wailing throughout eternity. (The story usually ends as a cautionary tale for other children--behave and don't venture near the water or La Llorona ["la yah-ROHN-nah"] may mistake you for one of her own children and pull you beneath the waves!)

There are a number of different versions of lyrics for the tune, which mostly seem to have very little to do with the legend. Here are five selected verses in English versions (i.e., not entirely literal translations, c2009-2015, E. Lein) by me: 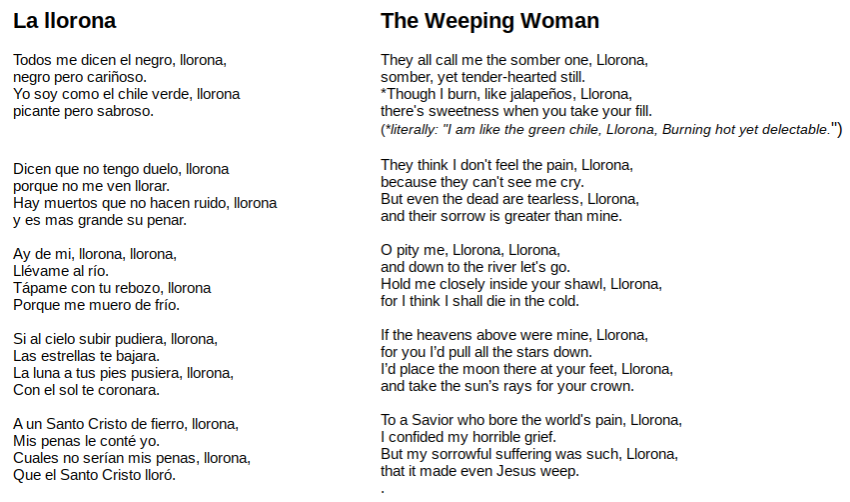